The Touchdown that United a Stadium 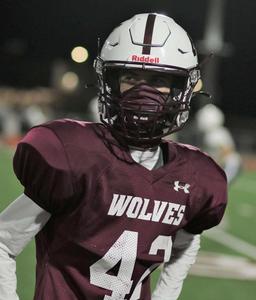 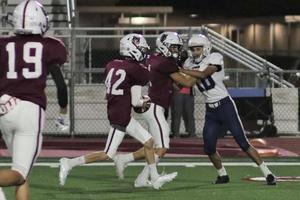 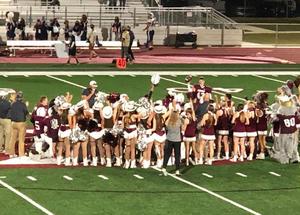 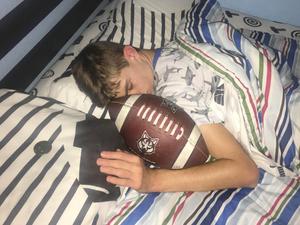 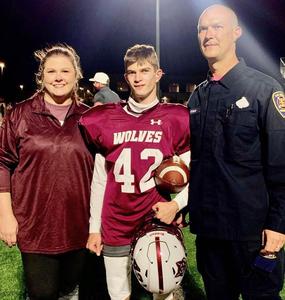 Coaches and players watch highlights from football games weekly. That's how they improve. One play, however, from Davenport High School's first homecoming game has gone viral, and the lessons it teaches improves everyone's outlook on humanity.

Running a football into the end zone and scoring a touchdown can be described only as exhilarating. But top it off with cheering teammates rushing the field while the stadium erupts in excitement from both sides, well that’s something out of a movie. Except, it happened Friday, Oct. 16, at Davenport High School during the Wolves’ first homecoming game.

It is a touchdown that will be remembered by all who witnessed it firsthand, and by those who have continued to watch it on social media and on news outlets as far as Canada.

Freshman Gage Dunivan, #42, heard his name called by the announcer in the fourth quarter of the game against Austin LASA. He was going in for the team’s best running back. This was the moment he had been working for all year. He spent every day running the same drills as his teammates, suiting up with them at every practice, and he was ready.

With shouts of, “Go Gage!” ringing in his ears, the 15-year-old joined the huddle, and the play called “the Gage Special” was executed to perfection. Gage, who has cerebral palsy, ran the football into the endzone with his teammates surrounding him and the opposing team displaying amazing sportsmanship.

“In my 15 years of coaching,” says DHS Athletic Coordinator James Zimmerhanzel, “I know that this is a play and a moment that I will never forget. It meant so much to this team, to Gage and to the community. It truly shows you how much he means to this program.

“He earned it. He hasn’t missed a practice all year, and he is as important of a player as all of his teammates are. We will make this an annual affair.”

At the end of the game, with a score of 69-0 in favor of DHS, Gage was presented with the game football and the official game coin from the opening coin toss. His mother, Devin Dunivan, took a picture of Gage fast asleep that night with the ball tucked under his arm and the coin resting on his pillow.

“It’s high school,” says Devin, who was busy working in the concession stand when she was told to get out to the stands to watch. “They didn’t have to do this.” She’s referring to the fact that this wasn’t Gage’s first touchdown. He had similar experiences in middle school, but this was his first high school varsity touchdown.

“All of us became one at that moment,” she says. “The electricity coming from the stands was real. It was friendship and acceptance. Nothing else mattered. For that moment everyone was truly one, making dreams come true for one boy.

“I can’t thank the coaches and the boys enough. What a way to start the first year of Davenport High.”

Even before it opened its doors to students on the first day of school this fall, DHS has been working hard at “building the Wolfpack,” establishing traditions and creating a culture of unity.

“I am proud of these young men,” says Zimmerhanzel. “We have an opportunity at this new campus to start new traditions and create a culture that defines us. We have students who come from different backgrounds, and we are teaching them that it doesn’t matter where you come from, we are all brothers. We are playing for each other.”

As a team, the Wolves have adopted a highway to keep clean, and they visit Garden
Ridge Elementary School every Friday to show support and school spirit.

“Gage has showed us strength and courage every day,” Zimmerhanzel says. “He is not able to run as fast or throw as hard as his teammates, but he always has a positive attitude and he never backs down. His positivity and courage turn your day around.”

At home, Gage’s parents, Devin and Ryan along with his three siblings, all sisters, have never treated him differently. He was diagnosed at the age of 1, and his parents were told that he would never walk, talk or have a normal life. They didn’t listen, instead, they had Gage begin aggressive therapy for 36 hours a week.

“We could see it in his eyes,” Devin says. “He was meant for more, and we worked hard.”

Gage is very verbal today and exercise is important for him. When he began middle school, his parents met with the coaches and asked if they would be willing to let Gage take athletics.

“We knew he needed to be a part of something,” Devin says, and they haven’t looked back.

“Comal ISD has been a blessing,” she continues. “The district has always been open to trying and working with us. We haven’t been told, ‘No, Gage can’t do this.’

“They encourage him, and the sports program has meant the world to him. I feel like a whole part of his brain is being unlocked, and this program is doing it. He learns every day from his teammates. He is in the right place.”

Congratulations, Gage, and the Wolves!

-Freshman Gage Dunivan, who has cerebral palsy, made his first varsity touchdown on Friday, Oct. 16, when the Davenport High School Wolves took on Austin LASA in its first homecoming game.

-Dunivan ran the ball into the end zone for his first touchdown as a varsity player.

-Enjoying his moment in the spotlight with teammates, coaches and classmates.

-Gage's mother, Devin Dunivan, took a picture of her son fast asleep with the winning football and coin, the night he scored his first touchdown as a varsity player.

-Proud parents, Devin and Ryan Dunivan with the star of the game.