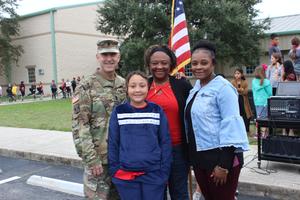 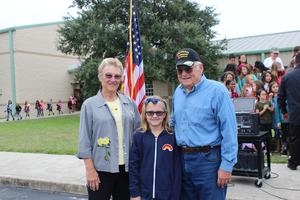 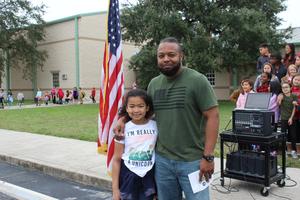 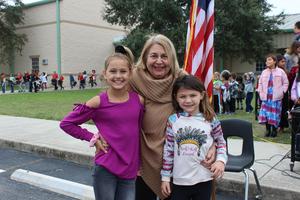 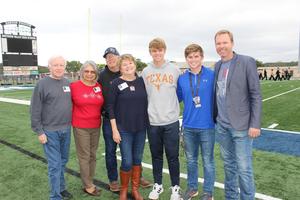 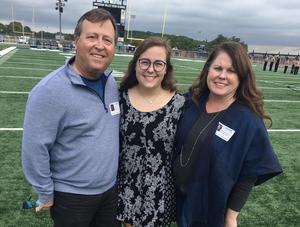 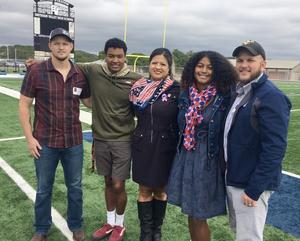 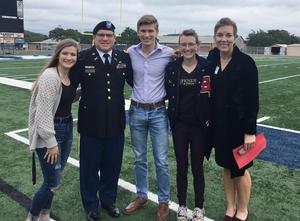 Every elementary, middle and high school campus within the Comal Independent School District commemorated Veterans Day 2019 with some type of program on Monday, Nov. 11.

Students, families and community members proudly wore red, white and blue in honor of veterans who have served in the United States military.

Veterans who were on hand for these special celebrations were honored for their dedication, courage and sacrifice. Students groups including choirs, bands, JROTC, student councils, dance and cheer teams performed while guest speakers shared messages of what it means to be a United States Veteran.

Here are just a few of the veterans in attendance.

“This is a nice honor,” said Gross, “and it is good for these students to see veterans being honored and to learn about the history of our country in this way.”

Albert Bunson, U.S. Army, Retired Staff Sergeant, served from 1999 to 2014 with two deployments. His wife, Lydia Bunson, is also retired from the U.S. Army. They have one daughter, Inara, 8, who is in the third grade at SES. Bunson is no stranger to the campus where he volunteers as often as he is able serving as a Hallway Hero and wherever he is needed.

Blanche Thompson, U.S. Air Force, Retired Staff Sergeant, served from 1980 to 1986. She was a medical specialist who flew medical evacuation missions. She and her husband who serves in the U.S. Navy, have two daughters who both have ties with Comal ISD. Her daughter, Courtney Thompson, is a teacher at Indian Springs Elementary; and her daughter Ashley Girdley has children who attend SES. Harper Girdley is a second grader, and Caydence Thompson is a fifth grader.

Dave Poist, U.S. Army, Sergeant Major, will retire in August of 2020 with 30 years of service. Currently he serves at Fort Detrick, Maryland, with the U.S. Army Medical Research Institute of Infectious Diseases.

“I joined the military because I have a long line of military service in my family,” Poist said. “It is a big deal to give back to your country and to keep the tradition of service was important to me.”

His wife, Yolanda Poist, is retired U.S. Army Sergeant first class, who served 23 years. They have three daughters. The oldest two, Courtney, 25, and Kayla, 23, graduated from Smithson Valley High School. The youngest, Kirra, 10, is a fourth-grade student at SES.

In addition, Yolanda’s sister, Carolyn Donaldson, serves in the U.S. Army and will retire with 30 years of service as well in August 2020. She is currently stationed in Fort Hood and is a Command Sergeant Major.

Dale Douglass, U.S. Army, retired Lieutenant Colonel, spent 27 years in the military from 1972-1999. Three of Douglass’ nine grandchildren attend Comal ISD schools; Cooper is a junior at SVHS, Cole is a sophomore at SVHS and Macy is a fourth grader at Johnson Ranch Elementary. His son, Sy Douglass, is an assistant principal at SVHS.

Douglass has been attending the SVHS Veterans Day ceremony for a few years, and he remembers the first time he attended.

“The veterans were seated on the football field, and the Jr. ROTC conducted a pass and review,” he recalled, “and that was the best I felt since I left the Army. Then, I turned around and looked up in the stands and couldn’t believe what I saw – the entire student body, every student, of Smithson Valley High School paying respect to the veterans on the field.”

“This is the first time that we have been able to participate in the Veterans Day ceremony,” explained Violeta. “Having this special event speaks highly of the community, and the importance it places on the sacrifices all of these veterans have made in serving our country.”

Kyle Kuhn, U.S. Air Force, retired Lieutenant Colonel, served from 1982 to 2006. He and his wife, Stephanie, have two children who attend Comal ISD schools; Caroline, a senior at SVHS, and Davis, an eighth grader at Smithson Valley Middle School.

“I’m glad to see that students are learning our history and the fact that freedom isn’t free,” said Kuhn. “It’s wonderful that they take the time to commemorate Veterans Day.”

Brian Waltman, U.S. Army, Colonel, has served in the military for 26 years both active and in the reserve. This year’s guest speaker for the ceremony at SVHS, Waltman spoke to the crowd about resilience, perseverance and dedication. He was honored to speak this particular year since all three of his children attend SVHS including Rachel who is a senior; Austin, a sophomore; and Hollie, a freshman.

“This is special, because all three of my children are here today,” Waltman said. “Ceremonies like this one help people to remember, and that is important. Our military is made up of volunteers, and that is significant. This is a group of individuals who chose to defend our freedoms.”

Thank you to each veteran who took the time to attend one of Comal ISD's ceremonies, and thank you for your service.