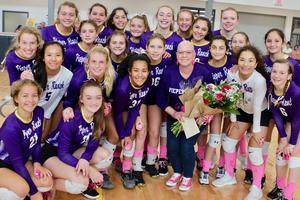 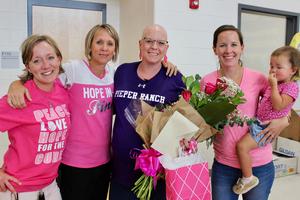 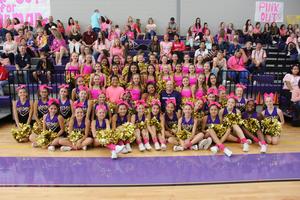 October is breast cancer awareness month, and for one Comal ISD campus, the disease has hit home. A beloved teacher was diagnosed this summer with the disease, and her outlook has become an inspiration to everyone she meets.

Students, teachers, parents and fans were decked out in pink at Pieper Ranch Middle School Thursday for the eighth-grade girls “Pink Out” volleyball game in honor of one of their own.

PRMS may be one of Comal Independent School District’s newest campuses and only in its second year of operation, but it already feels like a family; and when a family member is in need, everyone steps up to help.

That is exactly what Kimberly Poorman, the campus’ curriculum instructional coach, has found since being diagnosed with stage 2 breast cancer while pregnant with twins.

“We all want her to know that she is not alone in this journey,” said Mitzi Lancaster, PRMS assistant athletic coordinator, who organized the “pink out” volleyball game and is a cancer survivor.

Poorman, 33, has leaned on that support system for the last nine weeks as she completed three rounds of chemotherapy to slow the growth and shrink the tumor which she noticed at the end of July. With a focus on her twins, a boy and a girl, her medical team ensured her that this particular medication would not harm them. In fact, at 34-weeks, both are doing well and growing right on track.

While the eight-year veteran teacher claims that the greatest side effect from her chemo treatment is fatigue, no one would know it since she continues to work every day without a hint of slowing down with plans to work until Oct. 25 when she begins her maternity leave. Stronger rounds of chemo treatments will begin after the babies are born; and Poorman’s family is ready to help with diaper duty and whatever else the soon-to-be mother of three needs. Four-year-old Carter is excited about being a big brother too.

From this experience, her message to anyone who will listen, is to have annual exams and conduct self-exams.

“Go to your exams,” she said. “I’m outside all the normal areas for age, heredity and other markers, and yet here I am.”

Lessons Beyond the Classroom

The consummate teacher, Poorman, who was awarded the 2018 KENS 5 Excel Award in Education for Comal ISD, hopes her students learn two valuable lessons from her. The first, is to understand that everyone experiences personal struggles so they are not alone; and during those times, it is important to continue to work hard and be kind.

“Students deal with big problems,” she said, “struggles at home, school, family and even illness. I just want them to know and see that others around them are dealing with their own set of problems. I want them to not see themselves as alone in their struggles. I want them to see me as someone who is continuing to work hard and be kind through my personal struggle.”

The second lesson Poorman hopes her students learn from her is to be comfortable with who they are, “even if you lose your hair or something drastic changes with your appearance,” she said.

As a middle school teacher, Poorman has always known how big a role appearance plays in the daily lives of her students. She realized, however, that her students aren’t alone. After shaving her head once her hair began falling out from chemo treatments, she wasn’t so sure how she would be perceived without her long hair.

“I went shopping for the perfect wig and pretty scarves,” she said, “but when it came time for me to go to school, I decided to go without them. I put on some fancy earrings and went bald. When I walked inside that day, I felt vulnerable.”

She has found only encouragement, however, wherever she goes, from both students and colleagues. One student stopped to tell her, “I think you are brave.”

That is the best description of Poorman, brave, strong and a role model for all.

-The Pieper Ranch Middle School volleyball team hosted a “pink out” game Thursday, Oct. 10, for a PRMS teacher, Kimberly Poorman, who is battling breast cancer while pregnant with twins.

-Pieper Ranch Middle School hosted a “Pink Out” volleyball game for one of their own, Curriculum Instructional Coach Kimberly Poorman who is battling breast cancer while pregnant with twins. Pictured from left is PRMS Counselor Rachel Kaspar, PRMS Assistant Athletic Coordinator Mitzi Lancaster, Poorman and Counselor Elizabeth Terry with her daughter, Brynn.

-The Pieper Ranch Middle School dance team and cheerleaders were on hand for the “Pink Out” volleyball game on Thursday which honored their Curriculum Instructional Coach Kimberly Poorman who is battling breast cancer while pregnant with twins.