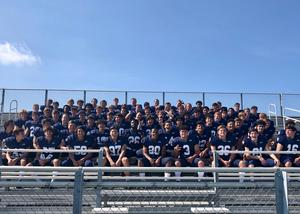 The Smithson Valley High School varsity football team is stepping up to raise awareness and funds to help find cures for childhood cancers through Touchdowns Against Cancer.

The Smithson Valley High School Rangers football team is well on its way to leading the country in raising funds for St. Jude Children’s Research Hospital through Touchdowns Against Cancer.

Currently ranked fourth with less than $500 between themselves and the lead team, the Rangers have a good shot at raising the most funds for the month of September in support of Childhood Cancer Awareness Month.

Coach Shinn learned about the program through the Texas High School Coaches Association and knew he wanted the Rangers to be a part of it. The first student he approached with the idea was Senior P.J. O’Toole, who knows a little something about fighting childhood cancer.

O’Toole, who is a full back on the varsity team, was diagnosed with acute myeloid leukemia (AML) as a kindergarten student at Bill Brown Elementary and has been an advocate for childhood cancer awareness ever since. Today, he is cancer free.

While O’Toole began the charge for the Rangers’ Touchdowns Against Cancer campaign, many players have stepped up to lead the 75-player strong team with videos, social media posts and more.

With a current winning record and two games to play for September, the Rangers can easily meet its goal of raising $5,000 by the end of the month, but they need the community’s support.

Individuals may make a pledge for every touchdown scored by the Rangers or give a flat donation. All proceeds will benefit St. Jude Children’s Research Hospital and help find cures for the 16,000 children and adolescents who are diagnosed with cancer every year. Help the SVHS Rangers by donating at touchdownsagainstcancer.com or go directly to the team’s page at https://touchdownsagainstcancer.com/leaderboard/.

-The Smithson Valley High School Football team, the Rangers, is among the top four teams across the country in raising funds for Touchdowns Against Cancer.