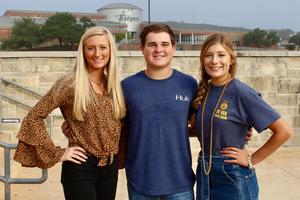 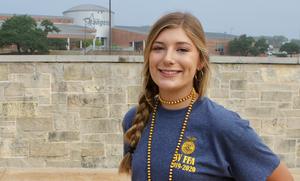 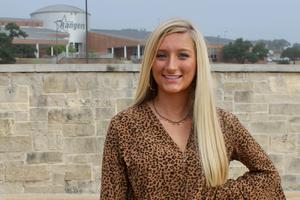 September is Childhood Cancer Awareness Month, and the perfect time to honor Smithson Valley High School students who have raised a total of $100,803 over the last three years for the Leukemia & Lymphoma Society.

For the last three years, a Smithson Valley High School student has represented the Comal Independent School District as a Student of the Year candidate for the Leukemia & Lymphoma Society (LLS), and the tradition continues with the launch of the 2020 campaign by a SVHS sophomore.

The 2020 SVHS Student of the Year candidate is Avery Walker, who will represent the district in the fourth year of this leadership development and philanthropy program in which high school students are nominated and selected to participate in a fund-raising competition for seven weeks. The candidate or candidate team which raises the most money at the end of the campaign is titled the Student of the Year by the South Central Texas Chapter of LLS.

Walker has a great group of mentors to help her with her campaign beginning with the previous Rangers who came before her, successfully raising a total of $100,803 in three years for LLS. The SVHS 2019 Student of the Year Candidate Kayla Friesenhahn raised $24,153 during her seven-week campaign; SVHS 2018 Candidate Tyler Miles raised $26,650; and SVHS 2017 Candidate P.J. O’Toole raised $50,000.

“I really like everything that LLS has done for patients and their families,” said Friesenhahn, 16, a junior at SVHS, “not only funding research and treatments, but also helping families get through the cancer process and treatments through financial aid. I think it is a really good cause and to see the money actually going where they say it is going, is really great as well.”

Each of these student leaders accepted the challenge of raising money for LLS for personal reasons. O’Toole, fought his own childhood cancer battle when he was diagnosed with acute myeloid leukemia (AML) as a kindergarten student at Bill Brown Elementary. Today, O’Toole is a senior at SVHS, a full back on the Rangers football team, an advocate for childhood cancer awareness and cancer free.

“No matter what you do,” said O’Toole, “you can make a difference. It doesn’t matter how old you are, just taking a little bit of your time and either donate or get involved in something will help save someone’s life.”

Miles, a 2019 SVHS graduate, took the challenge because his grandmother had leukemia and several family members fought cancer diagnoses; plus, he enjoys helping others.

It was personal for Friesenhahn too, whose grandmother has been involved with LLS for many years and whose uncle passed away from leukemia at age 14, and it was O’Toole’s campaign that inspired her to participate. As an eighth grader at Smithson Valley Middle School, Friesenhahn listened to O’Toole while he spoke to her National Junior Honor Society about his campaign and his journey.

“I would love to see more students involved,” Friesenhahn said. “It’s crazy how much this program has grown over the last few years. It’s great to see how many area students have gotten involved and are making a difference.”

This coming year’s Student of the Year candidate, Walker, has a few more months to plan and organize her team before her campaign begins in January. Her team name is “Hope for Peggy,” named for her grandmother who passed away from cancer and whom she never got to meet. A member of the SVHS dance team and a local fishing team, Walker will be actively campaigning to raise funds for LLS and seeking the community’s support to continue the tradition.

The challenge is on for Canyon High, Canyon Lake High and Memorial Early College High to contact LLS and nominate a candidate to join Walker for the 2020 Student of the Year program.

These three Smithson Valley High School students took up the challenge to raise funds for the Leukemia & Lymphoma Society as part of the organization’s Students of the Year campaign. From left are Avery Walker, the 2020 candidate; P.J. O’Toole, the 2017 candidate; and Kayla Friesenhahn, the 2019 candidate.

Kayla Friesenhahn, a junior at SVHS, raised $24,153 as the 2019 Student of the Year candidate for the Leukemia & Lymphoma Society last spring.

Avery Walker, a sophomore at SVHS, is the 2020 Student of the Year candidate for LLS. Her campaign kicks off in January.