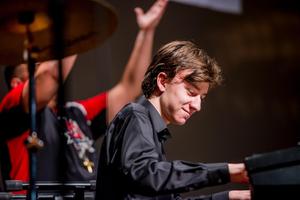 A current freshman at Texas A&M University in College Station studying psychology and recent Canyon High School graduate, Tyler Wetzel is honored to have one of his original pieces of music published by the world's largest percussion publishing company.

A 2019 Canyon High School graduate just added “published composer” to his resume. Tyler Wetsel, 18, was notified this summer that his original piece of music was selected to be published in the Fall 2019 Percussion Catalog for RowLoff Publications.

Titled “Through the Solstice,” Wetsel composed the piece on his piano during the summer of 2017 before beginning his junior year at CHS. The assistant band director, Brad Arnold, overheard him playing the tune and asked him to write it down on staff paper and share it with him.

“Any time a student does something above and beyond the typical classroom requirements, it’s a good thing,” said Arnold, who took the piece and adapted it for percussion ensemble which was then performed during the 2018 Night of Percussion. Night of Percussion is an annual event featuring a guest artist performing with CHS students. Next year’s event is scheduled for April 16, and will feature Jim Riley, the drummer for country band Rascal Flats.

“Through the Solstice” has a catchy melody with a lyrical style at its beginning and end and a “new age” vibe in the middle. Based out of Nashville, Rowloff Publications is considered the world’s largest percussion publishing company, and composers whose pieces are chosen for its publications are primarily professionals with many years of experience and many published titles to their credit.

Wetsel’s honor has already inspired other students to try their hand at composing music, said Arnold. Wetsel is currently attending Texas A&M University in College Station studying psychology. He plans to attend medical school and become a neurologist, but he continues to write songs, something he has been doing since he learned to play the piano in the eighth grade.

2019 Canyon High School Graduate Tyler Wetsel may now add “published composer” to his resume. His original piece of music, title “Through the Solstice,” was selected to be published in the Fall 2019 Percussion Catalog for RowLoff Publications.