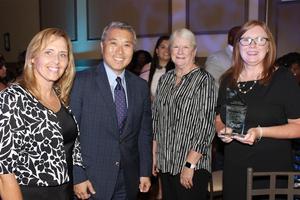 The annual 5K Jingle Bell Run is more than just another race. It is also an opportunity to support SJRC Texas, formerly known as St. Jude's Ranch for Children, which has been caring for children in the district's community for more than 36 years.

The Comal Independent School District was honored June 20 during the SJRC Texas’ inaugural Gratitude Gala for its annual sponsorship of the 5K Jingle Bell Run which benefits the nonprofit organization.

Comal ISD Superintendent Andrew Kim accepted the award from SJRC Texas for the district’s support of the nonprofit’s mission.

“We are proud to sponsor the annual 5K Jingle Bell Run which benefits SJRC Texas,” Kim said. “It’s been a great partnership for us.”

The 2019 SJRC Texas 5K Jingle Bell Run presented by Comal ISD is scheduled for Saturday, Dec. 14, at Gruene Hall.
SJRC Texas, formerly known as St. Jude’s Ranch for Children, cares for children and families who have been affected by trauma, abuse and neglect and have been removed from their homes by the Department of Family and Protective Services. Established in 1983 in Bulverde, SJRC Texas continues to provide a safe haven to children in need.